There’s a funny thing that happens when you travel.

Every sense is heightened by unfamiliar places, foreign languages and new experiences. Something as simple as a woman pushing her pram is somehow more interesting as she skillfully navigates the bridges of Venice.  A man paying for his groceries at the supermarket is enthralling when you understand none of the Polish that he speaks but at the same time recognise that he is participating in friendly banter with the checkout woman as you decipher facial expressions, hand gestures and body language.  Doorways become portals. Statues become sentient. People become characters. 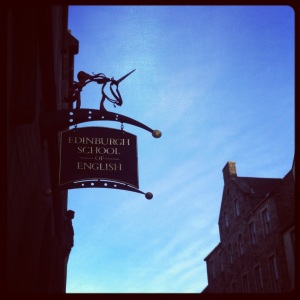 The Edinburgh School of English inspired to get creative with their sign.

When you watch the world through a traveller’s eyes, I am convinced that inspiration is at your unlimited disposal. With sight, sound, smell, touch and taste all intensified through being surrounded by the unknown, this naturally precipitates a different perspective on not just the extraordinary things, but the standard, run of the mill everyday stuff too.

What could be better fuel for the imagination?

If you have read E is for Edinburgh, then you’ll have some idea already of the impression it made on me. Not least of all was being able to follow in the footsteps of successful writers such as J.K. Rowling, Ian Rankin and Alexander McCall Smith to the Elephant House cafe where they each, at one time or another, went to write parts of their novels. Or seeing the belongings and original works of Sir Walter Scott, Robert Louis Stevenson, and Robert Burns in the Writers Museum.

I have already expressed that I am in no way surprised that they were inspired by such a beautiful city, and though it wasn’t just Edinburgh, it was there that I understood something probably quite significant to my future as a writer. 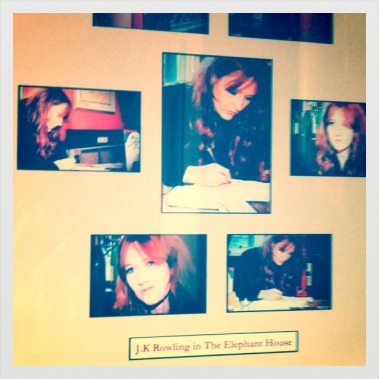 As I looked at the photos of J.K. Rowling sitting in the cafe writing Harry Potter, I realised that once upon a time she was like the rest of us aspiring creatives. Before Harry Potter was a household name, she sat in that cafe writing her novel, probably never knowing if it would ever see the light of day, wondering if she could afford that fourth cup of coffee. I’m sure that later on when she received her 1st rejection letter she felt as dejected as we all feel when are work is not recognised or loved as much as we love it. I’m even more certain that she felt worse after the 2nd, the 3rd, all the way up to the 12th rejection letter.

All these thoughts led to a small epiphany, all relating back to the big question: How do you know if you’re a writer?

I don’t think I’m the next J.K. Rowling, Tolkien or Robin Hobb. I don’t believe that my stories will survive the ages like the greats of old, or make me loads of money like the greats of today. I am not even convinced that I write particularly well or skillfully.

But what I have discovered is that I am never going to be any good at any of those things. Why? Because I don’t care enough for them to put in the required effort to try. 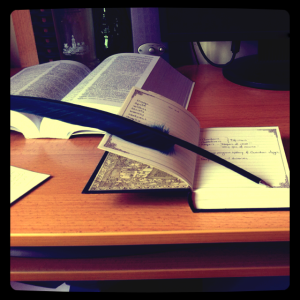 And then there’s writing.  I wake up every day looking forward to it. Without getting paid for it or ever expecting any monetary remuneration, I sit at my desk and I write. I edit and I perfect as if it were a thesis awaiting submission, and then I click save and sometimes never look at it again. Sometimes it’s hard and I get disappointed when the words don’t accurately reflect the idea in my head, which leads to frustration and misery.  But every day I still go back to it.

It’s the 9-5 job that keeps me in the office from 7am until midnight without a lunch break, and yet I never feel compelled to complain.

And I think that is what maybe, just maybe, makes me a writer. Not my skill with words or my chances of success. Nor any likelihood that it will ever amount to anything more than a little blog called Storytelling Nomad and a few published ramblings.

But like that ordinary woman sitting in her little cafe writing about an unknown wizard called Harry, I’m willing to keep at it every day because I’ve always been told that if there’s something you are truly passionate about, then you won’t care how long you spend working at it or how little you get paid for it, because the undertaking itself will be reward enough.

So I is for Inspiration. Be inspired, not by the people that have already ‘made it’, but by the average Joes like you and me, the ones that may or may not make it, J.K. Rowling circa 1990. I think we can learn the most from these people, because they are the ones that are willing to put their heart and soul into doing the thing they love most with only the smallest of hopes that it may one day amount to more.

Try and see the world through a traveller’s eyes and be inspired by the ordinary. Because if you do it right, extraordinary will certainly follow.

37 comments on “I is for Inspiration”