Since I nominated today to be a Get-Back-To-Writing day, naturally it was only a matter of time before old habits returned and I found myself rummaging around the deep dark corners of the Internet through articles, pictures, gifs and Pins related to writing, rather than actually just getting on with the writing itself. To add further insult to injury, I also, for a time, managed to convince myself it was all in the name of “research”.

Ah, brain. How you love to vex me.

While my disciplinary skills have clearly disappeared down the drain, it appears my procrastination skills remain in fine working order. As such, I successfully stumbled across this little gem of a list at Aerogramme Writers’ Studio. Originally tweeted by Emma Coates, Pixar’s Story Artist, these rules were the little kick-up-the-backside I needed to get back to work today.

May they be equally motivational to your own storytelling adventures.

Now get back to it!

This is what I was told to expect from Scotland weather. “Pack your thermals!” they said. “You’ll miss the sunshine!” they trilled. All the while I la-la-la-la’d away such unflattering portrayals of my beloved Scotland. I mean, I had spent two nights here last year in the middle of January. Yes, it had been cold, but the sky had remained a clear crisp blue whilst the sun had pinked my chilled cheeks. And let’s not forget I was a happy little mitten-wearing-Brit until the ripe age of ten. I was raised to laugh in the face of overcast!

Despite the evident preparation that was my English upbringing, I nonetheless braced myself for a sharp, icy wind and stocked up on scarves, gloves, beanies and wooly socks. I was ready to face the frosty fleshless monster! 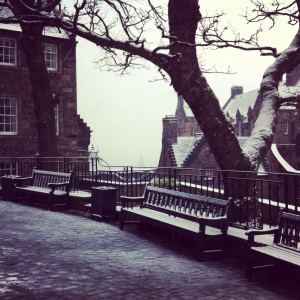 Welcomed to Edinburgh with a dusting of snow

And then I arrived. It snowed. It was beautiful. I watched the flakes fall from the warmth of my cosy new flat and thought nothing of gloom and misery and cold. It was the perfect welcome. And once the snow had melted away, it seemed the sun was willing and ready to resurface with a vengeance.

“It’s sunny!” shouted my flatmate one morning with great surprise and joy. She insisted we make the most of it, so we went exploring the city. Down wynds and closes we went, across parks, through royal grounds, over cobbled stone streets and always under the ever watchful eye of the castle.

The following day I awoke again to a shout of “It’s sunny!”. Again we went outside exploring.

On the third day, I heard the same declaration. “It’s sunny!” That was when I knew Edinburgh was treating me to a special kind of hospitality.

So continued the days, always with the surprised yet blissful announcement from my flatmate that the sun was once again gracing us with its presence. I knew I was being spoiled, but I didn’t care. Some days I even stayed inside to read a book by the bay window and soak in the sun through the glass.

And then came last Sunday. We had planned an “out of city” excursion to a castle ruin that called to us from what seemed like the edge of the world.

Instead we awoke to grey, gloomy, cloudy, cold AND miserable. We were late to get moving, but undeterred nonetheless. On the train we hopped and arrive we did to the beautiful picturesque beachside town of North Berwick. It was just past 1pm, and despite the cold grey weather, the town was abustle with dog walkers, pram walkers, and just your average walker walkers (not the flesh eating kind, to any of you Walking Dead fans out there wondering otherwise).

A little reminder of home in North Berwick

To get to the castle we needed to catch a bus just a little further out of town. When we arrived at the bus stop we realised we hadn’t accounted for the Sunday timetable, and had missed the last bus going out. I’m not going to lie, I was cold, cranky and disappointed. Though the town itself was an attraction, the castle was the primary reason for our visit. After seeing no taxi in sight and agreeing we were both too poor for such a luxury anyway, we retreated to the closest pub to ask if the castle was in walking distance and how long it would take.

The Ship Inn was warm. It was cosy. It was so very inviting.

Katy to Bartender: Hello! We’ve missed the bus to Tantallon Castle. Is it in walking distance?

Bartender: Oh aye. It’ll take ye about an hour but it’s a nice day for it.

Katy: [looks outside at cold, grey pit of doom] I’m sorry, it’s a nice day for…?

Bartender: It’s a nice day for a walk.

Bartender: [gives directions and tells us to enjoy the “nice day”]

Once back out in the cold I asked my flatmate, who has been living in Scotland for several years, whether the bartender had been joking. She kindly explained that when she arrived in Edinburgh she had been equally confused by a tendency to refer to cloudy days as “nice” days, but after a while understood that the Scots seemed to be pretty happy with the weather as long as it wasn’t raining, hailing or snowing. Anything else was considered “good weather”.

And I couldn’t help but be a little humbled. I’ve been spoiled the last 17 years in Australia, where a day without sunshine is like a day without air. We thrive off it. But to those where rainy days outnumber sunny days, of course the average cloudy day where you can leave your brolly at home is going to be a “good day”. These little pleasures are all relative and we have to take the good no matter how it comes.

And so we walked. The walk warmed us up. We enjoyed the scenery in a way we wouldn’t have been able to on the bus and I daresay enjoyed the day a great deal more. Tantallon Castle was as eerily beautiful as the pictures had indicated and to look over the cliffs at the smashing waves under dark clouds was spectacular in itself. I could almost see the sieges and pirates and smugglers and battles before me. Novel ideas were running rampant around my head.

And when it was time to go home we decided to walk.

It was, after all, a nice day. 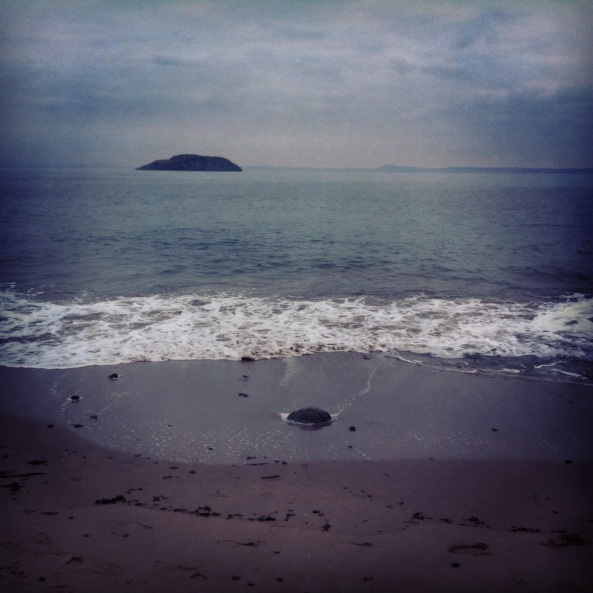