30 Day Book Challenge
Day 5: Book you wish you could live in

This is so easy, for the simple reason that I have so often dreamed of living in this particular book.  I cannot count the number of times I’ve read the series, but I do know I’ve done so not only in English, but also in the Italian and French translations.  In fact, I account my knowing words such as ‘owls’ and ‘wands’ in languages other than English to these books.

Since its debut in 1997 when I was a wee 12 year old, the Harry Potter books have captured hearts around the world, uniting children and adults alike in a world where pictures move, magic is real and every flavour beans really are every flavour.  I’m certain I’m not the only one who held a glimmer of hope that one day I, too, would receive a letter of acceptance to Hogwarts School of Witchcraft and Wizardry.

HOWEVER, if it had, here are some of the things that would have transpired:

I would have been in Gryffindor house, naturally.  It’s where all the cool kids are at, especially our resident celebrity ‘The Boy Who Lived’ Harry Potter.

Ron and I would have had a lasting love, hindered by a brief estrangement caused by Ron’s jealousy. This was due to the time Harry tried his luck with me at the Yule Ball after a few too many Butterbeers.  We all made up of course and Ron got over it when Harry started making goo goo eyes at Ginny. Now that, he had a harder time getting over.

Ginny wouldn’t have liked me because of aforementioned incident with Harry.  Also, I’m prettier than her.

My best friend would have been Luna.  We would have spent hours observing the Crumple-Horned Snorkack and skipping classes to fly the Thestrals.  Together we would have had shared a belief in the existence of: Moon Frogs, Blibbering Humdingers, Heliopaths, Umgubular Slashkilters, Wrackspurts and Nargles, despite no-one else believing us.  I would, however, shake my head at her when she yakked on about Aquavirius Maggots.  A creature that resembles a brain? Now that’s just ridiculous.

I would have been an astute student of Flying, Transfiguration and Care of Magical Creatures, but absolutely rubbish at History of Magic, much to the dismay of Professor Binns.  I would have had two muggle parents you see, like Hermione, and so knew nothing of magic (or the history of same) before starting at Hogwarts.  That said, Hermione would have been a life saver with her abnormally sized brain, letting me copy her parchment on many occasions in exchange for a few vials of Amortentia, a love potion.  You see, at first I think Hermione was a bit jealous when I started dating Ron, but she got over it when I offered to help her find a boyfriend of her own.  That being, of course, an impossible task seeing as she is so bloody stuck up and a bit of a know-it-all, after many months of failed attempts I would have asked the Weasley brothers if they had any love potions to spare. They would’ve happily obliged, free of charge no less! This was partly because they thought I was totally awesome, but mostly because they thought I was way too good for their little brother.  Hermione would have had her share of loved up wizards, and I would have gotten my homework done.  Result.

My Patronus would have been a Lion.  Take that Dementors! Peow peow!

As Harry had Hedwig, Hermione Crookshanks and Ron Scabbers, my Magical Familiar would have been a Cornish Pixie named Sly.  We would get up to a lot of mischief together, including taunting the Fat Lady with lots of fat mumma jokes, such as “Your mumma so fat, she sat on a rainbow and skittles popped out.” Looking back, I suppose we were quite cruel, but Sly and I enjoyed our antics immensely.  And the Fat Lady got her own back that time we snuck out late and she refused to let us back in, only to be discovered by Snape a short time later, who gave us the arduous task of polishing all the trophies in the trophy cabinet on the evening of the Gryffindor vs Slytherin Quidditch Finals. That bastard.

My wand would be a 12 inch Holly with a Dragon heartstring core.  Apparently this makes it very effective for hexes.

For the end of year exams during my first year at Hogwarts, I would have successfully devised a potion to source and trap all of Voldemort’s Horcruxes.  After doing so, the Ministry of Magic would have been able to destroy said Horcruxes on the advice of Professor Dumbledore.  This would have in turn led to the true death of Voldemort, who apparently was still hanging around like a bad smell after his last rendezvous with the Potters all those years ago.  I would have been commended for my achievements, awarded a medal by the Minister of Magic himself and become something of a celebrity for a brief time.  That was probably the most exciting thing that would have happened during my seven years at Hogwarts.  The rest of my time there would have been pretty boring, with nothing of particular interest happening.

Oh, wait a sec, Harry Potter did get kind of fat and there was that time he got an FUI for flying under the influence.  He really did enjoy his butterbeers.  Yeah, that was pretty exciting at the time I suppose… 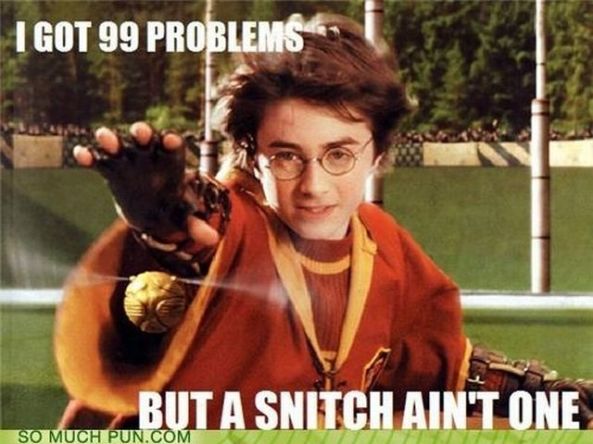 Harry flying under the influence (Courtesy of Izimile which has many other funny images like this one. Click on the photo to be taken to them)

Yep, I sure would’ve liked to live in the Harry Potter books…