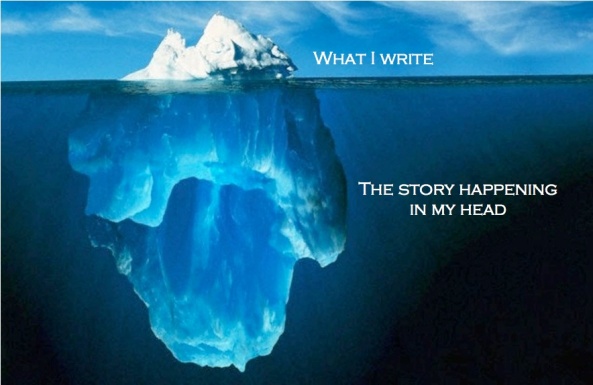 I think a writer of any genre gets accustomed to a certain degree of lunacy taking place in their brain at any particular moment. Whether it be coming up with plausible ways to kill off a character to meticulously establishing the detailed properties of dragon snot; the brain of a writer is a mysterious instrument of imaginative innovation, the clogs always ticking.

Though my aforementioned hiatus in writing has taken a toll on my creative output, what’s been going on in the mystery-that-is-my-head has remained consistently reliable in its “creative vision”, otherwise known as:

The other day I was taking one of my favourite walks through a local piece of glorious countryside. I had a river to my right, pastures to my left, the sun on my face. In a rare moment of total tranquility I found myself not thinking about anything other than how great life was in that moment.

And then I saw them.

Just ahead of me were two sheep on the bank of the river. Beside them in the river were two wading ducks. All four of them were looking at me.

It was as if I had caught them in the middle of some secret convention. A conference on the decreasing quality of bulk bill manure, the latest polls in insect activity, the next Miss Quacker 2014.

As is to corroborate my speculation, they looked to each other once more and through the bleats and quacks I could almost hear the words,

In a moment of absolute synchronicity, a reverse Avengers assemble, they dispersed. The ducks turned their tail feathers on me and waded together across the river, the sheep wandered off as a pair into the pastures, heads down. Nothing to see here, folks.

Whatever the blank page in front of me might have to say about it, inside my head stories are happening in unlikely places. I’m talking Titanic iceberg proportions here, guys.

Granted, most people might express some concern at the thought that the local wildlife were having an actual conversation. Me however? I take comfort in knowing that the writing wheels are still turning.

And that’s okay. Because despite recent evidence to the contrary, a writer doesn’t ever stop being a writer. Whether you’re writing stories, telling stories, or simply thinking stories, you’re creating new ideas throughout even the most mundane moments in life. Some will make it to print, others will just carry on building on the foundations of creativity inside your head, nurturing the characters and places that do find their way onto paper.

It’s a mysterious place, the mind of a writer, but for my part, there’s no place I’d rather be.

Scene of encounter. Animals in question refused to comment.