The first thing I noticed about Berlin was the graffiti. It’s everywhere. Not just the illegible, messy scrawling kind (although there is a lot of that too), but the interesting and often quite impressive modern styles of graffiti. It adds a certain touch of contemporary character to a place of inherent history and in some ways I guess demonstrates that the modern and the young do exist alongside the historic city walls.

Berlin is not just a city of the past.

The Berlin Wall was my first ‘official’ stop, with my brother as guide. He moved to Germany some time ago, and I’ve always found it far more interesting visiting places with someone who lives there, because they usually know a lot more than you can find in a guide book. Harry didn’t fail in this endeavour. 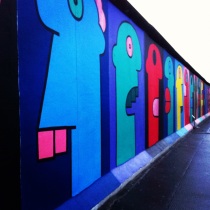 It was cold, raining and miserable, though to be honest, Germany failed to offer much other than that during my brief stay. It was strangely appropriate, however, when visiting the sites in Germany; a certain misery still hovers about the monuments that remain of the chaos it has seen over the centuries, so much so that overcast days still seem fitting. 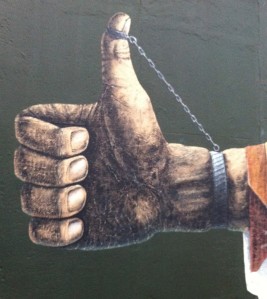 Bits of the Berlin Wall can still be spotted across the city, but the most famous is the 1.3 km stretch of the wall now playing host to the East Side Gallery, an international memorial of freedom.

Artists from across the globe have contributed to the paintings that cover this large section of the wall, each depicting their own interpretations of freedom, their perceptions of Berlin, and some serving as reminders of a time before freedom existed.

Probably my favourite part of Berlin was the Brandenburg Gate. I’m always totally enamoured by towering monuments, colossal old buildings and giant statues. The Quadriga atop the gate with its horse drawn chariot is enormous, which makes it even more impressive that Napoleon Bonaparte stole it after the 1806 Prussian defeat and took it to Paris. It was of course eventually restored, but how he got it off the gate (and how they got it back!), I have no idea.

Another stand out place in Berlin was the Bebelplatz. The Bebelplatz was the location of the 1933 Nazi book burning. About 20,000 books that did not correspond with Nazi ideology from writers such as Hemingway and Marx were destroyed.  Today the Bebelplatz is the site of the book burning memorial. In the middle of the square there is a glass plate set into the cobbles, beneath it a room of empty bookcases to commemorate the burning.

The Nazi book burning memorial in the Bebleplatz

The thing I will probably remember most about Berlin, however, is my public transportation misfortune one night when going out for dinner. My brother Harry, my friend Hayley, and I, hopped on the train with growling tummies. About 10 minutes into the journey the train came to an abrupt stop. After a brief announcement in German and a translation by Harry, we discovered there had been an ‘incident’ involving a person on the tracks. The announcement was shortly followed by two paramedics who just happened to be in our carriage, prying open the train doors to let themselves out; thankfully being in the first carriage we had stopped just at the start of the next station’s platform.

We sat patiently for a few minutes before deciding to get off the train, a luxury the people in the other carriages behind us could sadly not afford, only to discover the paramedics crouched in front of the train, looking under it with torches.

With the sound of sirens in the distance we began to guess at what the ‘incident’ with a person on the tracks may have been.

The night followed with us thinking we could walk the remaining distance, until 20 minutes later we realised we couldn’t. We hopped on a different train line, which our tickets did not permit us to do, and had to hop off again a stop before our station due to the train controllers getting on to check tickets.

When we finally made it to dinner, it almost didn’t seem worth it. A 20 minute journey had taken about 2 hours. But alas, we ate til our heart’s content and laughed more than is polite in civilised company.

Berlin isn’t a place I think I could ever feel at home, and I’m not just saying that because I think we ran over someone on the train! It’s a place full of history and wonderful monuments and you can still see bullet holes in many of the buildings, which I find fascinating. But it’s also full of tourists and like many big cities, I felt a persistent nagging to keep moving, walk fast and push through the crowds with unmatched determination. I didn’t feel it was a city I could just stand back, observe, and enjoy, which let’s be honest, is one of my favourite things to do.

That said, I wouldn’t say no to going back one day when the sun is out and my feet aren’t wet and cold from the rain. Perhaps I’ll even be able to find a little quiet spot to watch the city unravel from afar. 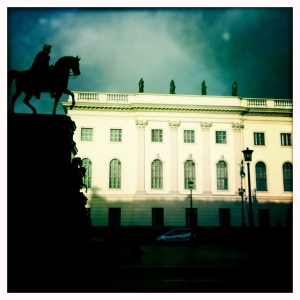