So I mentioned a few posts ago that I had a number of reasons for my recent absence, and today I’m going to share with you one of them.

In Australia there is an ongoing rivalry between the city of Sydney and the city of Melbourne.  Those who live in Sydney claim that they live in the superior city, and those who live in Melbourne claim much the same.  The general consensus, however,  is that Sydney is a financial city, and Melbourne a cultural city.  The Melbourne Writers Festival plays a significant role in this widespread understanding and the number of highly acclaimed national and international guests that attend from year to year, is testament to the festival’s success and the city’s appeal.

This year, I was lucky enough to be selected as a volunteer for the Melbourne Writers Festival.  Woo!  The festival is an annual event that has been running since 1986, and this year joined forces with four other international festivals to form the Word Alliance, now made up of:

So what kind of guests are we talking? Pretentious editors? High literature writers? Celebrity journalists?  Well yes, I suspect there are some of those, but the Melbourne Writers Festival is far more than that, and unique in that it observes all kinds of storytelling, not just the award winning, ostentatious kind.  The website elaborates: 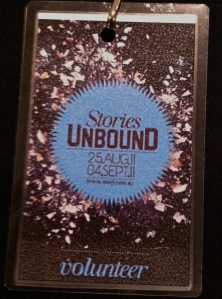 So, as a volunteer I get to make sure people are being orderly, scan their tickets, give directions, have a chat, make sure the guests are comfortable and answer any questions that patrons might have.  My fellow volunteers have so far been awesome, the shifts fun and the patrons very well behaved.  I also get to wear a groovy volunteer shirt.  Win.

The major perk to this gig, however, is my volunteer pass, which gets me into any event over the entire festival.

When I attended my orientation day a few weeks ago, I was astounded at the wide array of events, panels and workshops that were taking place and began to get quite excited at the prospect of attending these events in between my shifts.

One event, the Martin Martini In(k) Concert, merges sounds and image with musician Martin Martini playing in concert whilst four artists illustrate to the tune and inspiration of the music, their images projected onto the walls of the venue.  A totally unique experience, demonstrating that the art of storytelling is far from limited to just words on paper and can be inspired and influenced by anything around you, even sound.

Today, I attended a session called Why I Read, featuring prominent authors Kate Grenville (pictured left), Tess Gerritsen and Chris Womersley, all discussing the books that they read growing up and the impact it had on their calling as writers.  They also discussed how reading has changed, an echoing theme throughout the festival, and how we can encourage children and teenagers to read more.

Another highlight of the festival is the collection of city walks.  From specialist bookshops to the city’s origins, the guided walks highlight the Melbourne that is inspiration for writers, readers and storytellers.  My favourite of the walks is called Melbourne’s Hidden Dragons, and it takes you on a tour of the stone guardians and silken mascots that are scattered around the city and explores the mythology of the beasts and their presence in storytelling.  Seriously cool right? 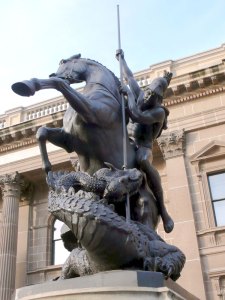 One of Melbourne's hidden dragons

And, on Tuesday evening I hope to attend Edinburgh Unbound, described as “Part reading, part gig, part party”.  Basically it is a fusion of Scottish and Australian musicians and storytellers coming together to present an evening of performance, music, film and stories in celebration of the partnership between the Melbourne Writers Festival and the Edinburgh Book Festival in our sister UNESCO City of Literature.

It is heartening to note that the attendants of the festival have so far ranged from toddlers to grannies, with no gaps in between.  I like to think this is a positive indication in light of recent discussions regarding ‘the death of the book’ and even ‘the death of the reader’, which today I was assured were both myths.  Yes, fellow writers, you can rest easy.

Young and old, we are still fascinated by the art of storytelling, whether it be through the traditional or graphic novel, music or art, the written or the spoken word.  How we tell the stories may be changing, evolving even, but the fact that we are still telling them and interested in how others tell them is what’s important and is what will keep the art of storytelling alive for a long time to come.

The festival runs from Thursday 25th August to Sunday 4th September and all the information can be found on the Melbourne Writers Festival website at http://www.mwf.com.au/2011/.